In the first quarter of fiscal 2009, the Company recorded a non-cash, pre-tax gain from debt extinguishment of $6.7 million, net of a proportionate write-off of deferred financing costs, associated with the October 2008 purchase of $35.5 million face value of its outstanding 4% convertible notes from certain note holders for $28.4 million.

The Company’s segment adjusted EBITDA for the first quarter of 2009 was $17.0 million compared to $21.8 million in 2008. Segment adjusted EBITDA is defined as operating income excluding allocations of corporate overhead, interest, taxes, depreciation and amortization, restructuring charges, goodwill charges and the impact of debt extinguishment.

The sales increase was primarily attributable to growth in the Radar Systems Division driven by increases in the Lamps MMR and ARPDD programs. Last year’s first quarter sales were favorably impacted by contracts with the Syracuse Research Corporation (SRC) that were winding down in the latter part of fiscal 2007. Excluding the prior-period sales related to the SRC contracts, core business sales grew by approximately $9.4 million, or 13%. However, operating income decreased $.1 million as a result of decreased gross margin performance attributable to program mix.

For the quarter ended December 31, 2008, the Company’s Garage Doors segment generated sales of $108.8 million, a 3.3% decrease from the first quarter of fiscal 2008. Garage Doors’ sales continued to be impacted by weakness in the residential housing and credit markets.

Operating loss of the Garage Doors segment increased by approximately $3.0 million compared to last year, primarily as a result of reduced sales volume and associated plant absorption loss, as well as an increased mix of certain higher-priced, but lower-margin, commercial products. The prior-year period was affected by restructuring charges of approximately $1.7 million.

For the quarter ended December 31, 2008, the Company’s Specialty Plastic Films segment generated sales of $112.7 million, a 5.9% increase from the first quarter of fiscal 2008.

Specialty Plastic Films achieved higher sales principally due to a favorable product mix in North America and the impact of increased selling prices to pass through increased resin costs, partially offset by the unfavorable impact of exchange rates on translated foreign sales. Operating income decreased by $.5 million as the favorable contribution to gross margin from the pass through of resin costs was more than offset by an unfavorable product mix and foreign exchange translation.

In September 2008, the Company substantially strengthened its balance sheet by raising $241.3 million in gross proceeds from the sale of its common stock. The transaction was effected through a common stock rights offering, along with an investment by GS Direct, L.L.C., an affiliate of Goldman Sachs. An additional $5.3 million of rights offering proceeds were received in October 2008. The Company intends to use the proceeds for general corporate purposes and to fund its growth.

For more information on the Company and its operating subsidiaries, please see the Company's website at www.griffoncorp.com. 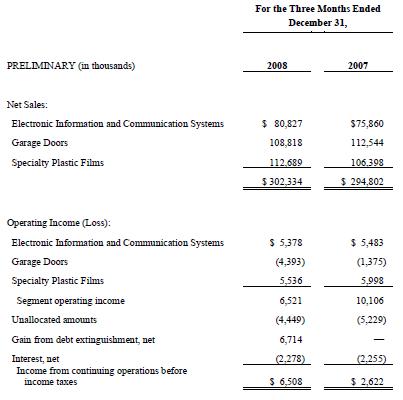 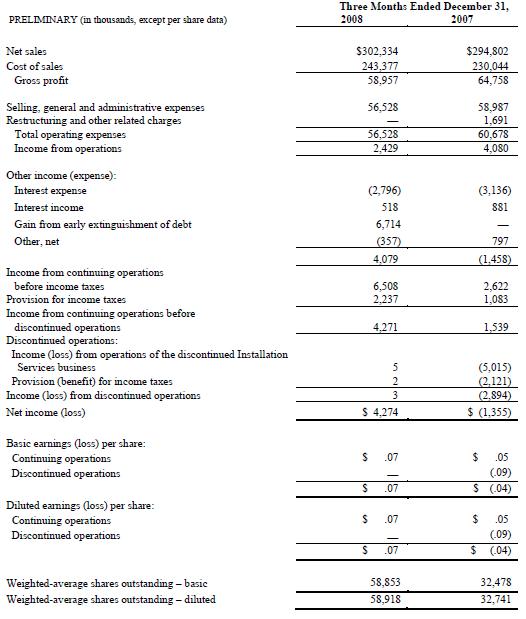 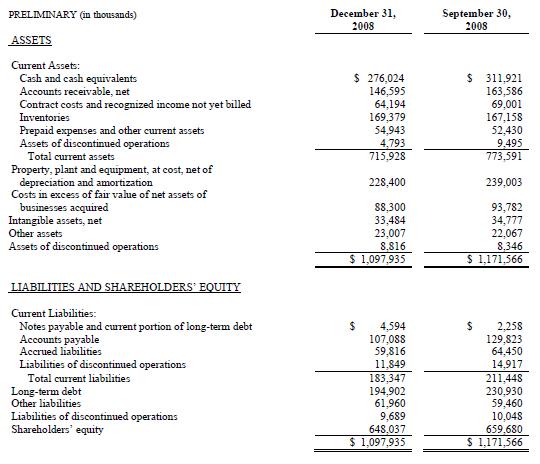 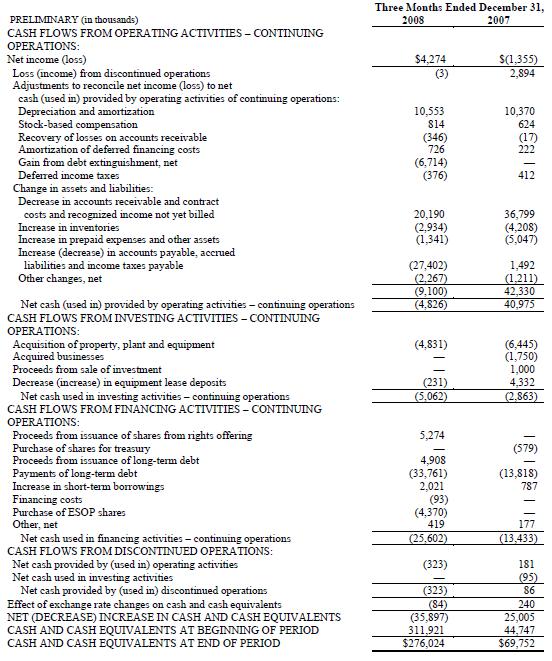 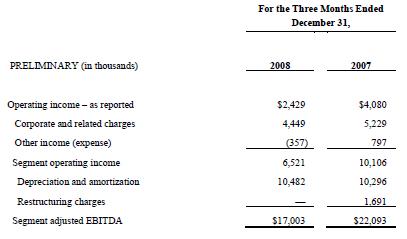