Ron Kramer, Chief Executive Officer, commented, “We are pleased with the results of our third quarter, which demonstrate continued growth in both revenue and EBITDA in each segment of our business. In particular, we are excited by the strong performance shown by Building Products, which continues to benefit from our repositioning and restructuring activities. We are also pleased to see significant revenue and market share gains in our specialty plastics business. Telephonics captured significant new contracts and is well-positioned for renewed growth and an extension of our leadership position.”

Mr. Kramer continued, “In late July, we announced the acquisition of Ames True Temper or ATT for $542 million for which the arranged financing is collateralized by Clopay and ATT assets. ATT is the leading North American manufacturer and marketer of non-powered lawn and garden tools, wheelbarrows, and other outdoor work products to the retail and professional markets. We are excited about the growth opportunities ATT has both in North America and around the world. We are confident that this transaction will provide significant initial value to our shareholders as well as enhance our ability to grow for the longterm. We look forward to closing this transaction before the end of September 2010.”

The Company noted that, on October 1, 2009, it adopted the new accounting standard which requires the liability and equity components of convertible debt instruments to be separately accounted for using the Company’s nonconvertible debt rate. Adoption of this standard must be applied retrospectively; as a result, the prior year’s third quarter income from continuing operations and net income were each reduced by $0.8 million and the related diluted earnings per share by $0.02.

Plastics revenue increased $28 million, or 29%, compared to the prior year quarter. The increase was primarily due to higher volume from new customer wins and expanded programs with existing customers as well as by higher customer selling prices driven by the pass through of higher resin costs.

For the quarter ended June 30, 2010, Segment operating income increased by $2 million, or 40%, compared to the prior year quarter. The benefit of the improved volume in the current quarter was partially offset by the negative impact of higher resin costs not yet passed through to customers in the form of higher selling prices.

Building Products revenue increased 6%, or $6 million, to $104 million compared to the prior year quarter. The increase was primarily driven by higher residential door volume, partially offset by the continued effects of the weak commercial construction market.

Segment operating income increased $2 million, or 276% compared to the prior year quarter. The operating performance was driven by the increased volume, improved plant absorption and lower product costs driven by the various restructuring activities undertaken over the past several quarters.

Telephonics revenue increased $6 million, or 7%, to $100 million compared to the prior year quarter, primarily attributable to the Crew 3.1 contract.

During the quarter, Telephonics was awarded several new contracts and received incremental funding on current contracts totaling $73 million. Contract backlog was $405 million at June 30, 2010 with 64% expected to be realized in the next 12 months.

During the quarter, Telephonics received notification that it had been selected as the provider of the maritime surveillance radar system on the Fire Scout, the U.S. Navy’s Vertical Take-off and Landing Unmanned Aerial Vehicle. This is expected to be a significant, long-term program and more details will be provided when available.

For the quarter ended June 30, 2010, unallocated expenses include approximately $0.3 million of costs incurred in connection with evaluating various acquisition opportunities; there was no comparable expense in the prior year quarter.

“Safe Harbor” Statements under the Private Securities Litigation Reform Act of 1995: All statements related to, among other things, income, earnings, cash flows, revenue, changes in operations, operating improvements, industries in which Griffon Corporation (the “Company” or “Griffon”) operates and the United States and global economies that are not historical are hereby identified as “forward-looking statements” and may be indicated by words or phrases such as “anticipates,” “supports,” “plans,” “projects,” “expects,” “believes,” “should,” “would,” “could,” “hope,” “forecast,” “management is of the opinion,” “may,” “will,” “estimates,” “intends,” “explores,” “opportunities,” the negative of these expressions, use of the future tense and similar words or phrases. Such forward-looking statements are subject to inherent risks and uncertainties that could cause actual results to differ materially from those expressed in any forward-looking statements. These risks and uncertainties include, among others: current economic conditions and uncertainties in the housing, credit and capital markets; the Company’s ability to achieve expected savings from cost control, integration and disposal initiatives; the ability to identify and successfully consummate and integrate value-adding acquisition opportunities, including the planned acquisition of ATT; increasing competition and pricing pressures in the markets served by Griffon’s operating companies; the ability of Griffon’s operating companies to expand into new geographic and product markets and to anticipate and meet customer demands for new products and product enhancements and innovations; the government reduces military spending on projects supplied by Telephonics Corporation; increases in cost of raw materials such as resin and steel; changes in customer demand; political events that could impact the worldwide economy; a downgrade in the Company’s credit ratings; international economic conditions including interest rate and currency exchange fluctuations; the relative mix of products and services which impacts margins and operating efficiencies; short-term capacity constraints or prolonged excess capacity; unforeseen developments in contingencies such as litigation; unfavorable results of government agency contract audits of Telephonics Corporation; protection and validity of patent and other intellectual property rights; the cyclical nature of the business of certain Griffon operating companies; and possible terrorist threats and actions, and their impact on the global economy. Such statements reflect the views of the Company with respect to future events and are subject to these and other risks, uncertainties and assumptions relating to the operations, results of operations, growth strategy and liquidity of the Company as previously disclosed in the Company’s Securities and Exchange Commission filings. Readers are cautioned not to place undue reliance on these forward-looking statements. These forward-looking statements speak only as of the date made. The Company undertakes no obligation to publicly update or revise any forward-looking statements, whether as a result of new information, future events or otherwise, except as required by law.

Griffon Corporation (the “Company” or “Griffon”), is a diversified management and holding company that conducts business through wholly-owned subsidiaries. The Company oversees the operations of its subsidiaries, allocates resources among them and manages their capital structures. The Company provides direction and assistance to its subsidiaries in connection with acquisition and growth opportunities as well as in connection with divestitures. Griffon also seeks out, evaluates and, when appropriate, will acquire additional businesses that offer potentially attractive returns on capital to further diversify itself.

For more information on the Company and its operating subsidiaries, please see the Company's website at www.griffoncorp.com. 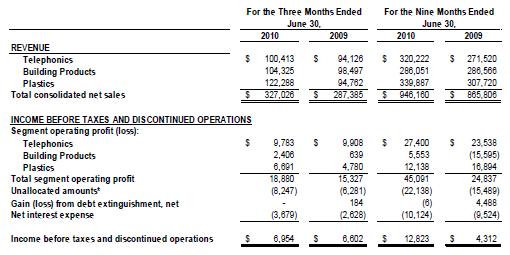 *Unallocated amounts typically include general corporate expenses not attributable to any reportable segment.

CONSOLIDATED STATEMENTS OF OPERATIONS
(Unaudited)
(in thousands, except per share data) 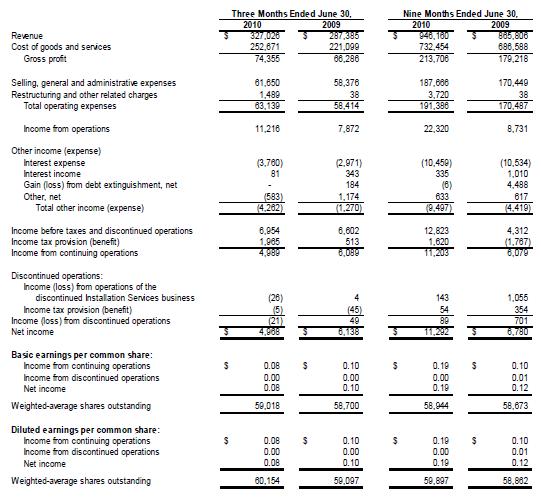 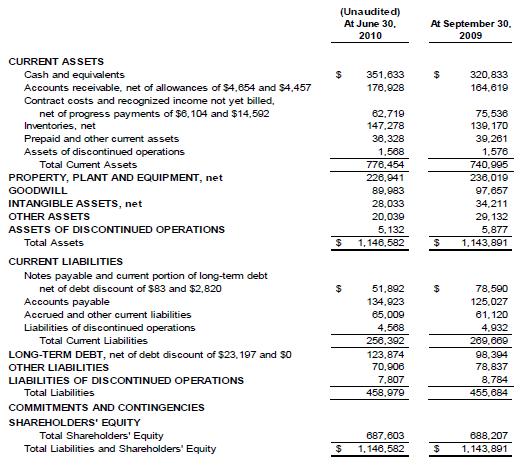 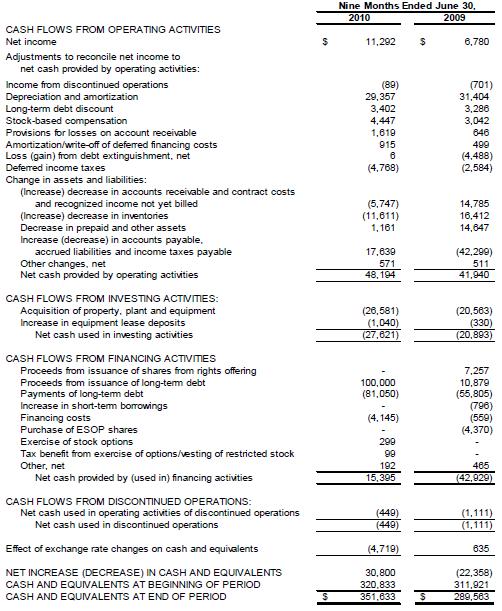 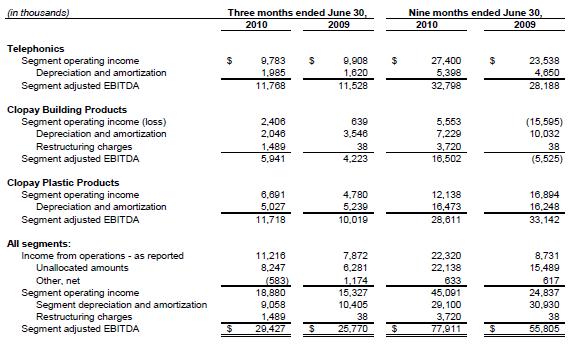 Unallocated amounts typically include general corporate expenses not attributable to any reportable segment.